I used to have the average fuel consumption 'from start' displayed on the digital dash. However, this seems to have changed to 'since refuelling'.

Please can anyone help?
Top

Welcome. I'm not positive, but I think you press the right select wheel on the steering wheel. then roll up or down to select which set up. from start.. From last fill. or from this start etc...
I can't remember the page, but it's hidden in the info about the digital screen settings in the manual.

Think it's just press on the wheel to cycle through the main consumption options. Up and down select range and other driving data metrics. Confusingly though, the "real time" consumption option is one of the up/down metrics.
Kamiq 1.0 110 SE, new since January 2021
Top

DTEG wrote: ↑
Thu Nov 25, 2021 10:52 pm
Think it's just press on the wheel to cycle through the main consumption options. Up and down select range and other driving data metrics. Confusingly though, the "real time" consumption option is one of the up/down metrics.

The OP has also posted this on Briskoda, to which I've been replying. I've tried what you say and I cannot get that to work, although maybe I'm missing something or just thick.
Perhaps you could demonstrate with pics ?
Top

Firstly I would emphasise I have the virtual cockpit & am not sure if the standard dash is different.
In the central dash data you have various options to have displayed. If you scroll through these options there is one showing ‘consumption’ . Select that option to show an instant figure that constantly changes as your driving technique does. I prefer to leave it on general data that is ‘Overview’ giving info like average mpg/mph/distance travelled/time etc etc.
Hope these photos help. Stress…..this may only be available on the virtual cockpit option. 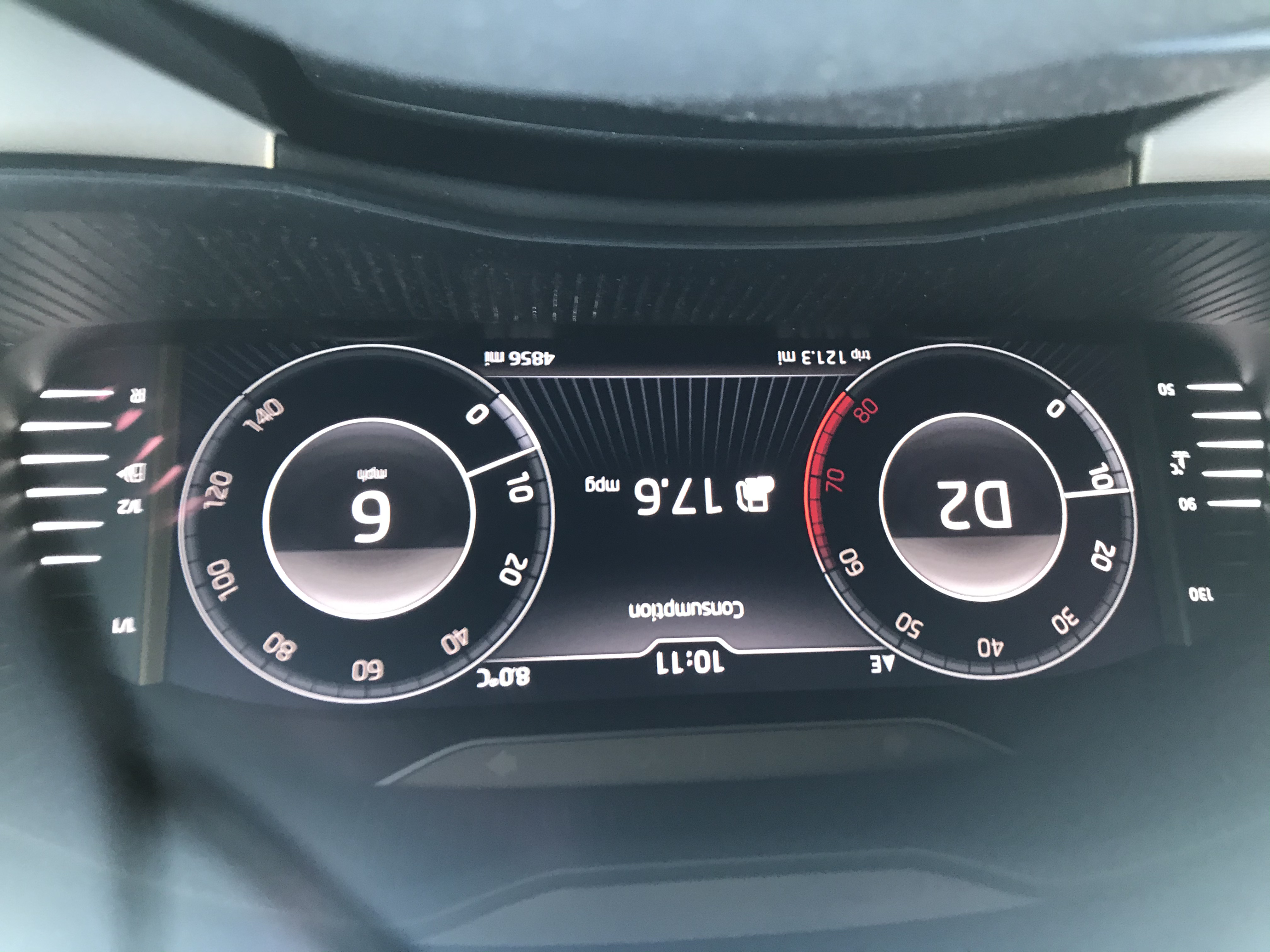 Cor, well done Lofty, that's what we're looking for, but how do you get that driving data to show in the first place i.e. what buttons do you press to get there ?? I only ever see the sat nav displayed in the centre,

We have the digital dash too, it was my mistake to mention standard dash as I thought the what the variant you show here was called - it's actually called the Classic Display.
Top

Based on a post over on Briskoda about the user manual, I've been in the car having a play. I've written my findings on Briskoda and I've copied that and I'm pasting it below.


Okay, I've been having a play and I've discovered some things. As usual, I found the Skoda manual hard to follow but it did lead me trying things which I'll try and explain (badly) here.

First thing I found, was that the info that can be changed in the centre of each dial in Classic View via the infotainment system can also be done via the controls on the RHS of the steering wheel.

This will be a rough explanation, you'll need to go and do it for yourself to learn all of the functions.

To change what info you see in the centre of the dials in Classic View, long press the icon on RHs of steering wheel that looks like two small squares with a right facing arrow beside them. This will bring up options between the dials which you can the scroll between them with the scroll wheel and when you reach the one you want to try, press down on the scroll wheel. Each one you try (there's 4 of them) will change what you see in the centre of the main dials.

It's also possible to get different data in the middle of the two dials. To access this, long press the button with a larger, left facing arrow on RHS of steering wheel. Once again, this will give you options, so use the scroll wheel to scroll through them and then press down on the scroll wheel to look at your chosen option.

Rather than list all of the possible options, it will be easier if you go and have a play as I did to familiarise yourself with them. There may be other options that I've missed.

I hope this is understandable and useful.
Top

Thanks for the info.

Yes, the manual is a bit heavy duty, isn't it.

Our Skoda Kamiq Forums are free to join and open to all.